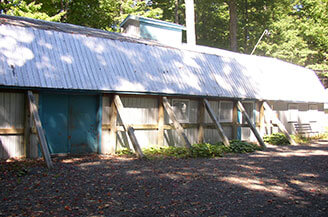 For more than half a century, scientific research and technological development in maple production have been mainly undertaken or financed by two Quebec government ministries: the Ministère de l’Agriculture, des Pêcheries et de l’Alimentation du Québec (MAPAQ), for aspects related to the harvest of maple sap, its transformation, as well as to the marketing of maple products, and the Ministère des Forêts, de la Faune et des Parcs (MFFP), for all elements relating to particular forest stands which constitute sugar bushes.

In 1996, it became clear that the main partners of the Quebec maple sugar sector would have to unite their efforts and contribute to the management and financing of research and development programs. The MAPAQ took the lead by offering the main organizations of the sector a true partnership in order to build a new research centre. To this effect, the MAPAQ pledged, for a certain period, to maintain its financial contribution in order to facilitate the transfer of human resources, certain buildings, as well as all the scientific and technological expertise developed and consolidated over the years in the field of maple syrup research. In return, the other partners pledged to raise a significant portion of the sums required to finance Centre ACER activities and ensure its growth.

It was then, at the request of Mr. André Vézina, deputy-minister at the MAPAQ, that Mr. Bernard Aurouze, director of the maple sugar Research Group, then tied to the Institut de technologie agroalimentaire in Saint-Hyacinthe, met with the main leaders of the maple sugar sector to propose this type of partnership, never heard of at the time.

Understanding the importance of technological development for the maple sugar sector, the partners enthusiastically accepted the agreement in order to maintain the new knowledge obtained by applied research activities realized by a specialized and multidisciplinary group of researchers. Thus was created a dynamic research team, having industry and government support as well as all the expertise and technological knowledge of the time, ready to try and remedy certain concerning situations.

Over the course of 1997, different memorandums of understanding are concluded between the parties. In 1998, a new corporation was born: Centre de recherche, développement et de transfert technologique acéricole inc. (Centre ACER). The year 1998 was thus a year of transition between the realization of a governmental research program and the implementation of a true program proposed by the new general manager, Mr. Richard Cormier, and accepted by maple sugar sector partners during a board meeting at the Centre ACER.

In 2004, a new infrastructure was inaugurated in order to replace the century-old buildings erected on the site of the Saint-Norbert-d’Arthabaska sugar bush. The modern architectural concept chosen for these new buildings reflected the research and development function of the Centre ACER. Some structural elements also evoked the original building. 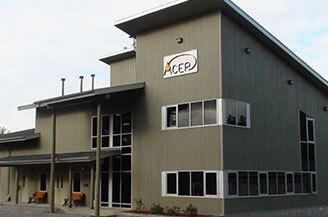 For this important project, the Centre ACER would like to highlight the exceptional collaboration of its main financial partners such as the ministère du Développement économique et régional (MDER), the ministère de l’Agriculture, des Pêcheries et de l’Alimentation du Québec (MAPAQ), as well as the members of the corporation who, in addition to their annual contribution, have agreed to inject substantial amounts to complete the sums required by the governmental financing programs. It is also important to highlight the quality of the professionals (architects, engineers, and construction workers) associated with the project and who proposed often audacious technical solutions to respond to the operational constraints of an exceptional building on many levels. Lastly, we would also like to mention the contribution of the scientific and technical personnel of the Centre ACER.